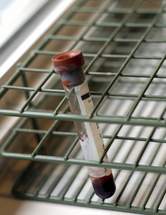 Pregnancy testing is performed to determine whether or not a woman has a fertilized embryo in her uterus. A pregnancy test detects the presence of the hormone human chorionic gonadoptropin (hCG) in the body. This hormone is usually only produced when an egg has successfully been fertilized and attaches to the uterine wall. Levels of hCG rise quickly and within a matter of days after a woman becomes pregnant. There are two types of pregnancy tests that are commonly performed; one uses a sample of urine, and the other, a sample of blood. Both tests measure the levels of hCG in a woman's body.

A home pregnancy test allows a woman to find out, in the privacy of her home, if she is pregnant. For the most accurate results, a woman is advised to wait 1 week after a missed period before taking a home pregnancy test. The test usually contains a stick that the woman holds under her urine stream. The stick is then inserted into a plastic container and, after a few minutes, an indicator gives a positive or negative result for pregnancy. Although most often used at home, a urine test is also used at a doctor's office.

If the results of a home pregnancy test are positive, a woman should see her doctor for further testing to confirm the pregnancy. In some cases, a urine test produces a false negative if it is taken too early. Therefore, a woman whose result is negative but who is experiencing typical signs of pregnancy, such as fatigue, nausea and breast tenderness, should schedule an appointment with her doctor.

Pregnancy testing through a blood test is performed only by a doctor. A blood test is considered the most accurate form of pregnancy test because it can measure even a very small quantity of hCG. A quantitative blood test, also known as a beta hCG test, measures the exact amount of hCG in the blood. These tests are very effective, and provide an accurate pregnancy result approximately 6 to 8 days after ovulation.